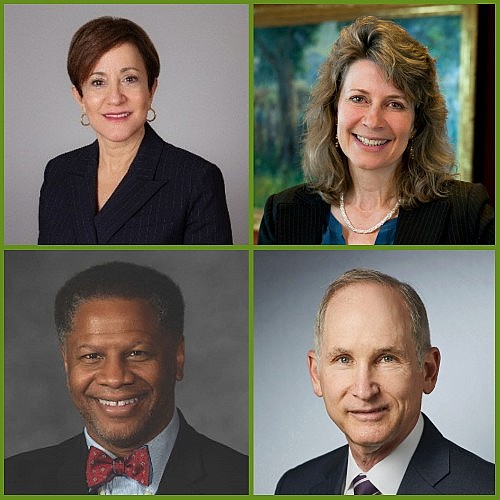 AACI members have elected Caryn Lerman, PhD, as vice president/president-elect of the association. Dr. Lerman is director of the USC Norris Comprehensive Cancer Center. Her two-year term will begin in October during the 2020 AACI/CCAF annual meeting.

Cornelia Ulrich, MS, PhD, and Robert Winn, MD, have been elected as new board members, and Charles S. Fuchs, MD, MPH, has been appointed to fill the remainder of Dr. Lerman’s term as a regular board member. Drs. Ulrich and Winn will replace outgoing board members Gerold Bepler, MD, PhD, and Timothy L. Ratliff, PhD.

Prior to leading the USC Norris Comprehensive Cancer Center and serving as associate dean for cancer programs at USC’s Keck School of Medicine, Dr. Lerman was senior deputy director of the Abramson Cancer Center and vice dean for strategic initiatives in the Perelman School of Medicine at the University of Pennsylvania. She is recognized for her cancer prevention research that bridges the fields of neuroscience, genomics, pharmacology, and population science.

Dr. Ulrich is the executive director of the Comprehensive Cancer Center at Huntsman Cancer Institute. She is also a Jon M. and Karen Huntsman Presidential Professor in Cancer Research in the Department of Population Health Sciences at the University of Utah. Dr. Ulrich leads an interdisciplinary team of scientists on research related to the prevention, epidemiology, prognosis, and survivorship of cancer. She is also principal investigator of the HCI Total Cancer Care Protocol in the ORIEN network of cancer centers. Dr. Ulrich serves on AACI’s Conflict of Interest Task Force.

Dr. Winn was appointed director of VCU Massey Cancer Center in December 2019. He served as director of the University of Illinois Cancer Center from 2015 to 2019 and as associate vice chancellor of health affairs for community-based practice at the University of Illinois Hospital and Health Science System. Dr. Winn is committed to community-engaged research centered on eliminating health disparities. He is a principal investigator on several community-based projects funded by the National Institutes of Health (NIH) and the NCI, including the All of Us Research Program, an NIH precision medicine initiative.

Dr. Fuchs is the director of the Yale Cancer Center and physician-in-chief of Smilow Cancer Hospital. He has spent his career leading research programs in gastrointestinal cancer epidemiology, biology, and drug development, while caring for patients as a practicing medical oncologist. Previously, Dr. Fuchs served as Robert T. and Judith B. Hale Chair in Pancreatic Cancer Dana-Farber Cancer Institute and Harvard Medical School and chief of the Gastrointestinal Oncology Division.

Drs. Lerman, Ulrich, Winn and Fuchs will work closely with other AACI leaders to support the organization’s mission of enhancing the impact of academic cancer centers.