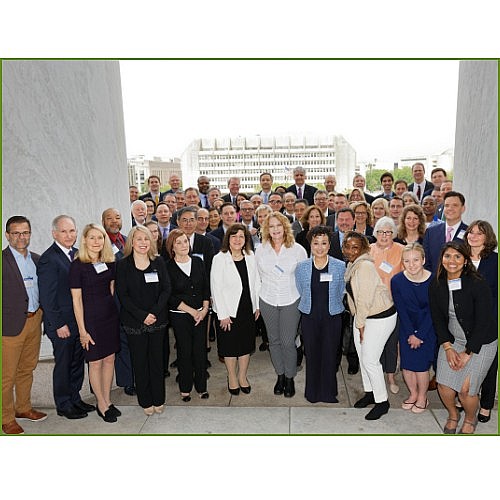 On Tuesday, April 30, AACI co-hosted the 2019 Hill Day with the American Association for Cancer Research (AACR). Ninety-one participants, including cancer center directors, researchers, oncologists, survivors, and other advocates, representing 37 cancer centers and 24 states, attended meetings with legislators and staff on Capitol Hill. The group gathered to present a unified voice in support of stable funding increases for the National Institutes of Health (NIH) and the National Cancer Institute (NCI).

This year, recipients of AACI’s new Hill Day Scholarship were among the patient advocates in attendance. Representing the states of Florida, Kansas, New Jersey, and Ohio, these advocates helped highlight the far-reaching impact of cancer and underscore the importance of continued funding for the NIH and the NCI through their unique and compelling stories.

Dr. Fuchs—a cardiologist and the wife of Charles Fuchs, MD, MPH, director of Yale Cancer Center—was diagnosed with colon cancer in 2006. She got the news from her husband, a leading colon cancer expert. Cancer ran in the family: Dr. Fuchs had learned about her niece's diagnosis shortly before she got the news of her own. As a young mother of three children, Dr. Fuchs worried she would not see her kids grow up. And who would proofread her husband's grants?

In 2018, Griffin was diagnosed with HPV-related throat cancer. He felt a lump while shaving and asked his friend, a physician, to look at his throat. Like Dr. Fuchs, Griffin is a parent of three and worried about his children's future. A long-time Pittsburgh radio personality, he had recently launched a new marketing and branding company with the backing of venture capitalists. He decided to use the new platform to share his cancer journey and continued to broadcast throughout his treatment at UPMC Hillman Cancer Center. In his remarks, Griffin credited Robert Ferris, MD, PhD, and Dan Zandberg, MD, both of UPMC Hillman Cancer Center, with saving his life.

During the visit, Hill Day participants were energized by the news that the House Labor, Health and Human Services, Education, and Related Agencies Appropriations Subcommittee approved by voice vote its draft Fiscal Year 2020 spending bill. The bill included a $2 billion increase for the NIH.

“It is vitally important that cancer center representatives come to Washington annually to advocate for stable, predictable funds,” said Roy A. Jensen, MD, AACI president and director of The University of Kansas Cancer Center. “As the saying goes, ‘If you’re not at the table, you’re on the menu.’ Having a strong contingent in Washington this year—including 18 AACI cancer center directors and numerous researchers, government relations professionals, and cancer survivors—ensures that our collective voice is heard loud and clear by our legislators.”