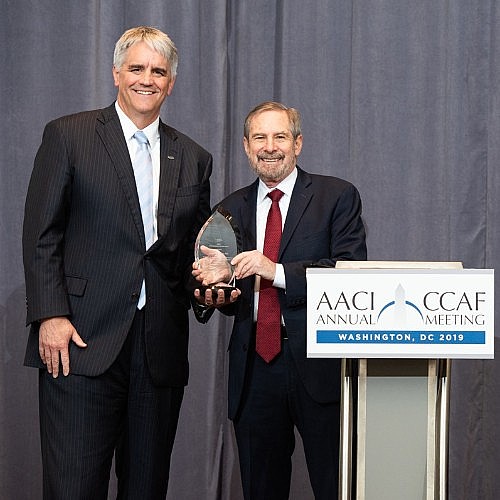 Douglas Lowy, MD, received the Distinguished Scientist Award on October 21, during the 2019 AACI/CCAF Annual Meeting in Washington, DC. Dr. Lowy accepted the award after delivering a talk titled "Preventing Cancer by HPV Vaccination." In addition to his long-term research on the molecular biology of tumor viruses and growth regulation and his exploration of oncogenes and tumor suppressor genes and their signaling pathways, he played a key role in enabling the development of vaccines for human papillomavirus (HPV).

He has served as acting director of the National Cancer Institute since 2018. Presenting the award to Dr. Lowy, AACI President and Director of The University of Kansas Cancer Center Roy Jensen, MD, remarked, “Not only do we honor Doug for his scientific accomplishments, but also for his commitment to the cancer centers.”

Thomas Sellers, PhD, MPH, director and executive vice president of Moffitt Cancer Center, introduced a video from Rep. Castor, stating, "Kathy is one of the nation’s leading champions for federal investment in cancer research, the architect of budget amendments, 'Dear Colleague' letters, and multiple other ways to push for increased funding for the National Institutes of Health." He added, "Congresswoman Castor also invests considerable effort into cancer prevention, with a long-term campaign to raise awareness of HPV-related cancers and the HPV vaccine."

Dr. Fearon said, "As a result of champions like Congressman Upton, we have witnessed, in recent years, a steady bipartisan commitment to increases in NIH funding and know with his continued support these successes will continue."

Following the Public Service Awards, Peter and Brynn Huntsman accepted the Champion for Cures Award on behalf of the Jon M. and Karen Huntsman family. The Huntsman family has donated or inspired donations totaling $1.4 billion to cancer, beginning with a $10 million gift to cancer research in 1993 and the $100 million gift in 1995 that formally established and named the Huntsman Cancer Institute (HCI) at the University of Utah.

"Jon M. Huntsman had a saying: 'Cancer moves fast, and we have to move faster,'" remarked Cornelia Ulrich, PhD, MS, executive director of the Comprehensive Cancer Center at HCI. "I can tell you that this sentiment is embedded in the culture of HCI, where every square inch of our campus—nearly 1 million square feet today—is dedicated to relieving the suffering of cancer patients by working tirelessly to provide compassionate care, by providing training to the next generation of cancer researchers and care providers, and by working closely with our communities to impact cancer in the state and the Mountain West region."

Accepting the award on behalf of his family, Peter Huntsman, chairman and CEO of Huntsman Cancer Foundation, also emphasized the value of community engagement, stating, “We have the opportunity to affect one of the most noble causes – the health and well-being of our communities. I can think of no greater calling.”